Scattered throughout Archos's forests and grasslands, elk are the planet's most common herbivorous species. They are extremely gentle and haven't seen much influence from the magic emanating from Gaia, unlike many other creatures. They don't boast much physical strength, but their keen intellect helps them survive and thrive even though they're surrounded by predators.

The Albino Deer is a variant of common Fauna found in Arthos. Exposed to magic, it is often sought out as a trophy, or vanity pet.

As of an update on 10/20/17, the albino deer now has a much higher chance to obtain magical shards when harvesting grass or wheat.

Albino Deer have the following food preference while taming:

Unlike other elk, the albino deer WILL chase and attack you, boasting somewhat significant damage. Lure it or drop it into an area with walls 2-3 high, then cover it in Stone Hook Arrow to knock it out. Simply have it chase you till it breaks the lines and drops from fatigue. 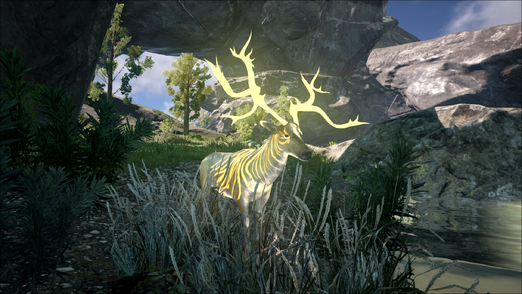