Arachnea are the spider-like creatures of Archos.

Arachnea are most common in the jungle and swamp regions of Archos, but you can find some of them at the mountain nearby the elves city. They are easy to spot thanks to their illuminated back. They have surprisingly little health, and are slow, so they don't pose much of a threat.

There is a subspecies, the less common Acid Spider.

As a carnivore, place Carnivore Feed, Fine Raw Meat or Raw Meat in the trough. Contrary to what is expected, the spider does not seem to like any spoiled meat. The spider will eat quite slow so make sure you have the time and abilities to defend yourself for a bit. However, their fatigue decreases very slowly.

The Arachnea is a carnivore and prefers the following food when being tamed:

Knocking out a spider should not be too difficult. Just run around her while shooting some arrows (about 10-15). Then run away from her so the harpoons will do the rest.

When tamed you can equip the spider with a saddle.

They have a high amount of constitution are quite fast making them a good mount for hunting goblins.

However, they have a quite low damage making them useless when attacked by Panther or Wolf.

Spiders are not affected by spikes, meaning they won´t get unconscious and are not taking any damage.

However, players, riding a spider will get the unconscious debuff. 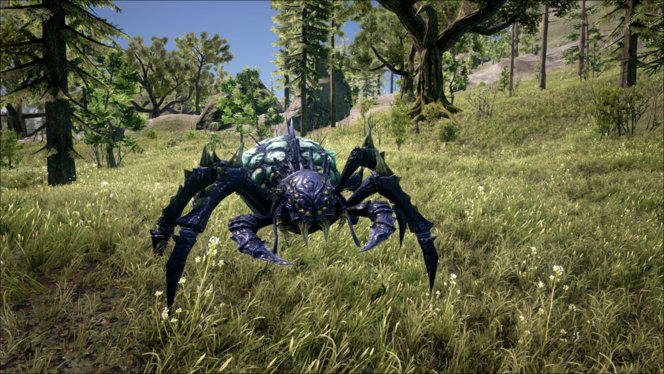