From Dark and Light Wiki
Jump to: navigation, search 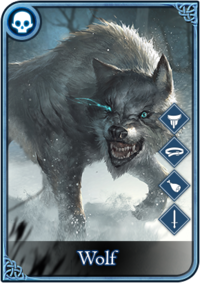 The Beastiary in Dark and Light includes cards for each creature in the game. Each card includes up to four symbols which help identify the following traits:

A wolf, for example, is incredibly aggressive and will attack other creatures on sight, which is shown by the single sword icon on its portrait. They are also carnivorous and can be tamed and ridden if equipped with the proper reins once tamed. *note: Wolves can be ridden without saddles, however they will lack the armor boost a saddle gives.

Creatures included in the current release or planned for release

The following 96 pages are in this category, out of 96 total.