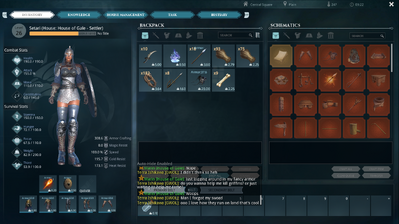 The Inventory in Dark and Light consists of the level/experience bar with the avatar name on top, Combat Stats and the Survival Stats. Below the avatar preview are the character's armor and weapon slots. Right of the character one can see further stats: Armor crafting, magic resistance, speed, cold resistance and heat resistance.

In the middle is the backpack, with the equipped primary and secondary belt below. Players can switch between both belts in using the Alt key.

On the right is the Schematics tab, with all the possible recipes the avatar has collected.

Note: Each player's inventory has roughly 300 individual inventory slots. If a player is at that max, and attempts to split an item stack in two, the amount split will simply vanish due to reaching this invisible limit.

This was done by splitting item stacks continuously until roughly 300 inventory spaces were taken up, which resulted in an extra items split vanishing.

Note: Not only does the player have an invisible 300 inventory slot limit, but pets and inanimate objects, such as the magical workbench, do as well.