The longhorn is a herbivore with large keratin horns on its head. Longhorn often travel in small groups of 2 to 4, they are social animals so attacking one will cause all of them to attack you. They are not territorial and will only attack if attacked first.

Longhorns are decent early-game gatherers and exceptionally good for harvesting bushes for a huge amount of Straw, Grass and Berry. Their ability to gather Stone and Wood is below average, meaning only a high level Longhorn will gather Wood about as good as the Satyr Axe and stone as good as a high quality Iron Pickaxe, which is nothing extraordinary, but decent. Taming them is somewhat harder than one would expect, even compared to a Bahamut aka. Flarehorn, so it might not be worth getting a high level one unless you can't find a Flarehorn, as even low level Longhorns will collect from bushes very well. Longhorns are superior to Colossal Flathorns in the bush gathering department as Longhorns are somewhat faster and have better weight.

Compared to other tamed animals like the Boar it does not tame as quickly because it does not eat fast and its torpor drain is somewhat fast.

The longhorn like all herbivores have the following preference: Herbivore Feed > Apple > Grass.

Without decent gear the attack of the longhorn hurts, luckily they are slow animals so you can just fire hook arrows and walk backwards, if it gains on you just sprint a bit further and repeat. Watch out if you want to run around them though, their attack has quite a wide arc to it.

The longhorn can gather a moderate amount of wood, sulfur and stone, whoever they are great bush gatherers, otherwise a behaving like a poor Flarehorn. They also have a good carry weight.

HP and weight with stamina if necessary. 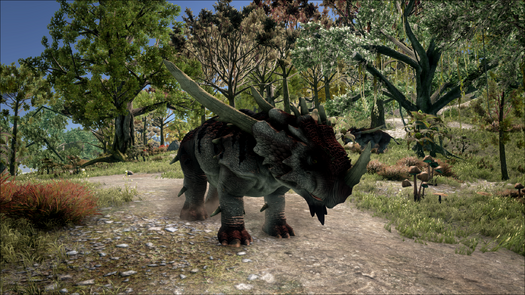