From Dark and Light Wiki
(Redirected from Stats)
Jump to: navigation, search

Survival Stats are the stats that govern players' survival in Dark & Light. 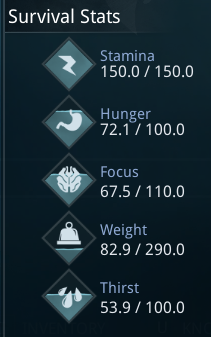 Stamina governs how long players can swing tools and weapons, as well as sprint. It is easier to regenerate Stamina by standing still rather than moving, since it regenerates in large chunks while standing still, and slowly over time if players are moving.

Hunger is just hunger, players require food to live in this game, or else you will be knocked out repeatedly until you get food. Hunger level drop speed can be adjusted in server settings/solo play settings.

Focus lets player characters stay awake and not be knocked out, as well as casting spells. Each spell uses some focus to cast. Players can regenerate their focus by sleeping in a bedroll, canopy or bed.

Weight is the stat that determines how much a player character can carry. The weight of armor also takes up weight in the inventory as well. After going over the weight limit, the player cannot sprint and will move slower and slower the more they pick up over their weight limit.

Thirst determines the liquid level in the player's survival stats. Typically this is restored by diving into a river or going into shallow water and pressing E to drink water (The game never tells the player this.). The other thing to do is get a container (the first container to be made is a Glass Bottle) that can be filled with water and drank from for a portable water source.S

The players body temperature is below a certain amount. Losing food faster because the cold enviroment.

Remedy: Get close to a heating source, such as a Campfire

The players body temperature is below a certain amount. This is a more severe version of the cold status.

Remedy: Get close to a heating source, such as a Campfire or Balrog

The players body temperature is above a certain amount. The players food stat is dropping. Losing food faster because the hot enviroment

Remedy: Jump in a pool of water.

The players body temperature is above a certain amount. This is a more severe version of the hot status. The players food stat is dropping at a faster rate.

Remedy: Get close to a Ice Imp or jump in a pool of water.

The player is in need of sleep as their focus stat decreases.

Remedy: Sleep in a Bed or Bedroll

The player must sleep as their focus is about to run dry. Slowly draining health. Torpidity increases as long as you have this status.

Remedy: Sleep in a Bed or Bedroll

The player has run out of oxygen while under water and is now drowning and taking a small amount of damage a second.

Remedy: Get to the surface of water to regain oxygen.

The player has run out of food and is taking a small amount of damage a second. Torpidity increases as long as you have this status.

The player is losing health over time, and no longer regains stamina. Torpidity increases as long as you have this status.

The player has run out of stamina and can no longer jump, run, roll or swim and your movement speed is slowed.

The players movement speed is decreased due to carrying items with a weight surpassing their Weight stat.

NB. the decrease in speed increases with the more weight carried.

The player is unable to move due to carrying too much over their Weight stat. This is a more severe version of Encumbered.

The players movement speed is halved and they are unable to run or jump due to the amount of health they have left.

Remedy: Raise your health by healing or eating.

The players is knocked out and unable to act and has limited vision. The player has reduced consumption rates when knocked out. When your constitution reaches it's max, you get this status.

Remedy: Wait to wake up or have an ally force feed you.

The player is resting. Granted by sitting in a chair. This halts consumption rates.