The Wyverns of Archos are of smaller weight, and they are surprisingly passive creatures that will flee when attacked. For their fleeing nature, currently they are quite difficult to knock out for taming (2018.November).

A tamed sprint-flying Wyvern is noticeably faster than a sprint-jumping horse with moderately lucky jumps.

Their base stamina is relatively good, especially for high level ones.

Adding points their health does increase it only by a little even for high lvl ones, so preferably you could use a Summoning Stone on them as life insurance and put all your points into damage instead. With their small 15 base damage they don't pack much of a punch even with a lots of points into damage, but it could still help you kill low level Wyverns faster to spawn higher level ones or to hunt weak prey to increase their weight faster.

The Wyvern is a carnivore that prefers food in the following order:

Carnivore Feed: As an example a lvl100 Wyvern on official server (2018.November) have been tamed purely on 28 pieces of Carnivore Feed, which is less than half of what greater carnivores would consume. Using carnivore feed you do not need to reattach hook arrows to increase fatigue, as the creature will be tamed on Carnivore Feed way before it's fatigue would run out.

It is worthy to note, that if you were trying to cull the number of low level Wyverns to make space for higher lvl ones to spawn (Which while being a somewhat gruesome job, unfortunately could be necessary) you can quickly kill low level ones when they land, provided you had the damage. Those escaping with low health can be sniped with the accuracy of crossbows. Naturally having a flyer, a higher level wyvern or anything more hard hitting will make this much easier.

For Wyverns will flee when attacked, so your best bet to tame one is to get one stuck in a cliff or mountainside to unload hook arrows into it. It is rarely achievable though.

Another strategy is to wait for them to land - which they do somewhat frequently - and unload as many hook arrows into it as you can each time they hit the ground. This method could get quite difficult for higher level ones, and depends a lot on terrain and their willingness to land.

When they land you could also turn them into sheep with the help of a Polymorph Staff Head and quickly build a cheap small building over them as a cage. Once you think you have attached enough hook arrows to it, go ahead and break the cage and let it knock itself out by breaking the tethers. This method might be very old and outdated, as in the current version of the game the Polymorph Staff Head will only turn them into sheep for 2-3 seconds, which is really not enough time to build a cage around the polymorphed Wyvern.

To cage a trapped Wyvern the sheep polymorph spell seemed to be an insufficient amount of immobilization. Even the Cobweb of Crystal Ball's slow seems to be inefficient at providing enough time to build the trap. It seems that to effectively immobilize a Wyvern you have to use a Frostbolt III Staff Head (which can also be bought from Sacred Path vendors with enough donations). It may deal a lot of damage, but a decent level Wyvern could take multiple hits, and you'll probably only need one hit anyways, as the impressive stopping power of the staff should be enough to build a quick cage around the creature.

Alternatively you could also use the long immobility provided by the Frostbolt III to simply unload a huge amount of hook arrows (Or if possible Iron Hook Arrows) which will further entangle the creature. At that point you could either build a cage around it or not. Keeping an optimally large(?) amount of hook arrows attached will have it's own immobilizing effect, during which you can mindfully reattach new arrows, while shooting and placing them from max range in hope the Wyvern would break it even at that low speed.

The Wyvern can carry: 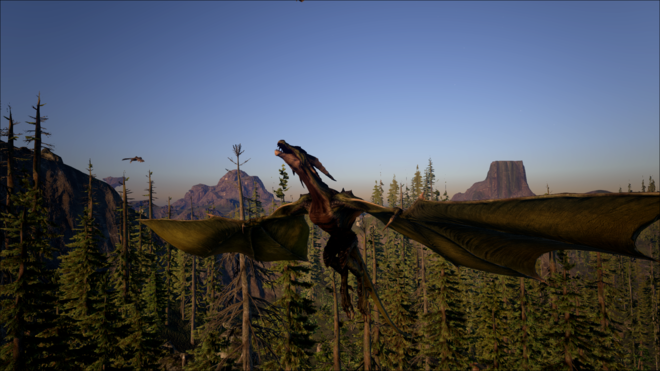